Every spring, the population is warned by the media of the appearance of ticks. The scientific background of ticks and the pathogens they transmit was highlighted and discussed at the international workshop "Tick-Borne Diseases" on June 21 and 22 in Berlin.

Ticks transmit pathogens to humans and animals during their blood meals

In order to understand what makes ticks dangerous and why this danger has obviously increased in recent years, basic knowledge about ticks and tick-borne diseases is necessary. 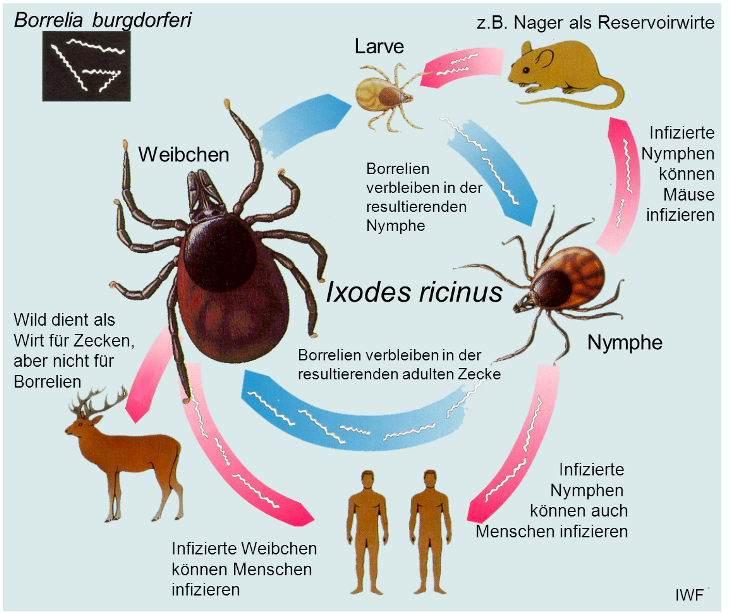 Ticks belong to the class of arachnids and the subclass of mites. In Germany, one of the best known representatives is the common wood tick (Ixodes ricinus). Also in Germany, but somewhat more rarely, the colorful ticks (Dermacentor reticulatus and Dermacentor marginatus) occur. All ticks develop in several stages of development by moulting from the larva via the nymph to the adult tick. Before each moult, the tick needs a blood meal, for which it seeks rodents, birds and medium and large warm-blooded animals, but also lizards. Humans can also serve as blood donors. For a blood meal ticks drill their mouth parts into the skin of their host. During the sucking act, which lasts several days, the ticks can take up pathogens from already infected hosts or, if they are already carriers of pathogens, they can transmit pathogens to the host (Figure 1).

Table 1: Overview of pathogens that can be transmitted by ticks

* Other ways of transmission than via ticks are possible and usually more frequent.
** In Germany the group is divided into 7 species, B. afzelii, B. garinii, B. burgdorferi, B. spielmanii, B. bavariensis (pathogenic) and B. valaisiana, B. lusitaniae (non-pathogenic), which in turn use quite different reservoir animals.

The workshop "Tick-Borne Diseases" focused on the close interaction between ticks, humans, animals and pathogens. Dr. Klaus Henning of the Friedrich-Loeffler-Institute, who had invited to this event, was pleased about the large number of participants: "It is essential that scientists from all disciplines come together for an exchange of ideas at this workshop," he emphasized at the opening. In order to conduct meaningful research in the field of tick-borne diseases, it is important that scientists work together on an interdisciplinary basis. After all, ticks can transmit bacteria as well as viruses and unicellular parasites to wild animals, pets and humans. For this reason, human and veterinary physicians often consult biologists, ecologists and researchers from other disciplines in research projects in order to obtain a broad picture of the occurrence of ticks and the spread of the pathogens. Infrastructure facilities such as the TMF and the National Research Platform for Zoonoses support scientists in their networked research.

Ruminants in the pasture protect against Lyme borreliosis

During the workshop it was shown that the interaction of changed environmental conditions and agricultural uses, animal husbandry and human behaviour leads to increased contact between humans and ticks. In addition, ticks have become more common in some areas due to changes in land use. Dr. Dania Richter and Prof. Dr. Franz-Rainer Matuschka (Charité, Berlin) were able to prove in scientific studies that extensive grazing with ruminants (e.g. cattle, sheep, goats) worsens the living conditions for ticks and those tick hosts that serve as reservoir hosts for the pathogens of Lyme disease. This project, funded by the Baden-Württemberg Foundation, also showed that infected ticks lose these pathogens during their blood meal to ruminants. This is because cattle and other ruminants are false hosts for Lyme borrelia, i.e. the pathogens cannot survive in them and cannot spread further. The result are "clean" ticks. The additional benefit is that when ticks suck on ruminants, other hosts are spared. Field tests, in which ticks were collected in grazed and ungrazed areas and their pathogen loads were determined, confirmed this in practice. The probability of coming into contact with an infected tick was drastically lower (up to 50 times lower) on pastures than on neighbouring, ungrazed areas.

Early summer meningoencephalitis (FSME) is caused by the TBEV virus and occurs mainly in southern Germany. Symptoms include flu-like illnesses and neurological signs due to inflammation of the brain and meninges. Studies presented by Dr. Donoso Mandke of the Robert Koch Institute (RKI) give rise to the hope that the examination of mice can provide valuable information on the occurrence of TBEV, for predictability and its future spread. The current notification data of TBE disease cases are published on a risk map updated annually by the RKI. The Standing Vaccination Commission recommends that residents and visitors to these designated risk areas be vaccinated against TBE. This vaccination protects against infection with the TBE virus, but not against tick-borne infections, nor against another tick-borne disease that is more frequent and widespread in Germany, Lyme borreliosis. These two diseases should in no way be confused.
Lyme borreliosis is caused by bacteria from the group Borrelia burgdorferi sensu latu and occurs throughout Germany. There is no vaccine available against Lyme borreliosis. However, the infection can usually be treated well with antibiotics. Incidentally, prevention is better than treatment. Information on how to protect yourself against tick bites and the infection with Borrelia burgdorferi can be found on the website of the Baden-Württemberg Foundation.

Less known: Bartonella, babesia and rickettsia are transmitted by ticks

In addition to the most common tick-borne diseases already mentioned, there are other diseases associated with tick bites in humans. These include tularaemia (so-called hare plague), babesiosis, anaplasmosis, Bartonellosis, Rickettsiosis or Q-fever. Tularaemia is caused by the bacterium Francisella tularensis. Frequently, this disease, which is accompanied by severe swelling of the lymph nodes and ulcers on the skin (so-called ulcers), affects foresters or woodworkers. Infections with anaplasma, Bartonella and Rickettsia can also occasionally occur in areas close to forests, which prompted scientists at the Ludwig-Maximilians-Universität (LMU) in Munich to examine wild boar and deer for signs of these pathogens.
Dr. Cornelia Silaghi (LMU) presented her studies at the workshop in Berlin. According to these studies, roe deer can be confirmed as hosts for certain Babesia and Anaplasm species in Germany and can be considered a likely reservoir for Bartonella. Rickettsiae have not been detected in either of these wildlife species, so the reservoir for this pathogen will have to be sought elsewhere.

With the pathogen of Q-fever, which mainly uses sheep, but also goats and cattle as a reservoir, it is controversial what role ticks actually play in the transmission. Dr. Klaus Henning from the Friedrich-Loeffler-Institute reported at the workshop that Coxiella burnetii, the pathogen of Q-fever, could be detected in ticks and that tick bites and tick faeces are able to contribute to the transmission of the pathogen to humans. However, he agrees with the scientists present that the wide and easy spread of the spore-forming pathogen, which mainly enters the environment during lambing, has led to infections far more frequently in the past through the wind and is the more probable and therefore more significant transmission route.

Relatively newly discovered in the series of tick-borne pathogens is Neoehrlichia mikurensis. Prof. Dr. Martin Pfeffer from the University of Leipzig presented in his lecture current studies on the occurrence of the pathogen in ticks in Germany and Denmark. According to his own studies, he and his colleagues were able to detect N. mikurensis in up to 36% of the sample pools, depending on the collection site and moulting stage of the ticks. They were also able to find several pathogens in some ticks (e.g. additional anaplasms or babesias). Since the pathogen could also be detected in different types of mice, it can be assumed that mice also represent a reservoir for this pathogen. According to current knowledge, both pets and humans can be infected with N. mikurensis. However, available case reports suggest that only persons with a very weakened immune system develop disease symptoms.

After two days of workshop on tick-borne diseases, the scientists will separate again on 22 June 2012, but not without confirming that such an event should be repeated on a regular basis in order to jointly discuss and bring together the current knowledge of the different disciplines. Dr. Henning is already planning for next year.

Ticks and their souvenirs: Record number of TBE cases in 2020

Actually, walks in the fresh air in nature are something good and especially in the lockdown many people have rediscovered taking a walk for themselves. Unfortunately, however, ticks also lurk in...

New Helmholtz Institute for "One Health" in Greifswald

new scientific hotspot for "One Health" The Helmholtz Centre for Infection Research ( www.helmholtz-hzi.de ) is founding a new outpost in Greifswald, which will be dedicated to "One Health" research...

Susceptibility of animals to SARS-CoV-2

Scientists answer questions about their study results in different animal species More than 60% of all emerging infectious diseases in humans are caused by pathogens of zoonotic origin, i.e. pathogens...

Follow-up report on the workshop "Inside Tick

Workshop „Inside Tick“ On 12 and 13 September 2019, the workshop "Inside Tick" was held in cooperation of the Zoonoses Platform, the Friedrich-Loeffler-Institute and the University of Greifswald. The...

German research consortium FluResearchNet met in Münster The viral flu, or influenza, is still presenting a permanent, worldwide threat to humans and animals. A constant stream of new influenza...