On November 29, 2016, representatives from science and the public health service (ÖGD) met for the fourth time in Berlin at a workshop jointly organized by the National Research Platform for Zoonoses and the Academy for Public Health Düsseldorf to discuss current issues and search for possible solutions. This time, the topic was antibiotic resistance, a pressing issue that can only be solved jointly by human and veterinary medicine.

The event was introduced by a lecture by Dr. Tim Eckmanns from the Robert Koch Institute (RKI), in which he described the resistance situation in Germany and internationally. He presented numerous initiatives that are dedicated to the reduction of resistance worldwide, up to the Global Action Plan of the World Health Assembly with its 5 goals: Communication and education, surveillance, hygiene, optimized use of antibiotics, and research and development. However, he also contrasted the continuing lack of access to antibiotics in some parts of the world: Access versus Excess; while sometimes excessive or incorrect use of antibiotics is practiced, which is related to the development of resistance, elsewhere there is an access problem to antibiotics. People continue to die for lack of treatment because they do not have access to life-saving antibiotics. The picture and the development of resistance in Germany is very dependent on pathogens and regions. Overall, however, the efforts to reduce antibiotic resistance through a broad range of measures are already making themselves felt.

Resistance control as a multifactorial challenge

Prof. Dr. Hortense Slevogt from the Center for Innovation Competence Septomics in Jena explained the different resistance mechanisms that bacteria possess and how they are passed on between bacteria. For every antibiotic, resistances are always found very quickly because they have developed parallel to the bacteria and have thus been part of the bacterial equipment since time immemorial. Each use of antibiotics thus increases the selection pressure on resistant bacteria and "mendelizes" them out, so that they become more frequent and more visible over time. The development of new antimicrobial substances could only be a small component in the fight against resistance, as the resistances belonging to the new active substances would not be long in coming. However, hygiene, antibiotic stewardship, education and training of all those involved (medical staff, patients) and a thorough examination prior to the necessary use of antibiotics are much more important. Reliable and above all faster diagnostic systems are indispensable for the latter.

Multi-resistant staphylococci - a problem for animals and humans

Dr. Christiane Cuny (RKI) reported in detail on studies on the transmission of multi-resistant staphylococci between humans and animals and on the colonisation of people who deal with animals for work or leisure. Indirect contact with animals, for example via a family member, could also lead to detectable colonisation with resistant bacteria. Dr. Cuny therefore motivates networked thinking and interdisciplinary cooperation, as has been the case in the zoonosis associations MedVet-Staph and RESET since 2010. In order to contain resistance in staphylococci, she has some practical recommendations for doctors, farmers, veterinarians and consumers: in addition to the restrictive use of antibiotics in humans and animals, she recommends, among other things, the rehabilitation of animal breeding lines, adapted housing conditions for fattening animals that have been shown to slow down the development of resistance, the establishment of a protective competitive flora, hygiene management and kitchen hygiene for consumers.
Need for further training in the health authorities
Dr. Gerhard Pallasch from the Health Authority of Stade reported on the everyday life of the health authorities, where there is often an enormous shortage of staff, which is why participation in research activities is often low. Antibiotic resistance is often a topic in connection with hygiene in hospitals, old people's homes and nursing homes. Dr. Pallasch criticizes that hygiene training is not a sufficiently high priority, even though antibiotic resistance is such an urgent topic and maintaining hygiene is a key factor in containing it. From the point of view of the health authorities, he said, there are many questions - for example on the subject of single or multi-bed rooms, on isolating colonised patients and on dealing with colonised employees.

Dr. Doris Heim from the Mecklenburg-Vorpommern State Office for Agriculture, Food Safety and Fisheries reported on her varied field of activity. She shared her experiences with the antibiotic minimization concept, which has been in force for livestock farming throughout Germany since 2014. It is the responsibility of the state authorities to sanction those who apply excessive amounts of antibiotics. If the quantity of antibiotics dispensed exceeds a certain relative value, an action plan to reduce their use must be submitted. If the application quantities are clearly overwritten several times, severe penalties may be imposed. After the first year of data collection, the quantities released were reduced by 50%. In order to further successfully reduce the rates, complex measures will be necessary in many areas, such as hygiene and stable construction. The task of the offices will then be less in the area of sanctions and more in the area of advice, prevention and communication. In cooperation with the HiCare network, which is based at the University of Greifswald, the topic of antibiotics in human and veterinary medicine is also being researched on an interdisciplinary basis. However, there is currently no overview of the quantities of antibiotics administered in human medicine. It also presents further regional and nationwide measures to detect and minimize antibiotic resistance.

A One Health approach needed for resistance control in Germany

Prof. Dr. Lothar Kreienbrock from the Institute of Biometry, Epidemiology and Information Processing at the Foundation of the University of Veterinary Medicine Hannover made it clear in his lecture that when considering the One Health topic, not only veterinary and human medicine should be considered, but also agriculture plays an important role. In addition, he said that joint efforts are crucial for progress in the fight against resistance and that mutual blame is preferable. He explained that the WHO had drawn up a 5-point plan for the containment of antibiotic resistance, which, however, is only partially reflected in the plans of Germany. These five points must now be transferred from the international to the local level and implemented. In particular, it was important to involve the public health system in this process. This required harmonised strategies, local cooperation and research support. Research in this area in Germany is - with a few exceptions - not carried out jointly, as there is no funding for this. Numerous individual aspects are already being investigated, but simultaneous observations of antibiotic consumption and antibiotic resistance, for example, are lacking.

In the discussion, which was moderated by Buko-Pharma after the lectures by Dr. Christian Wagner-Alfs, some participants were pleased that in veterinary medicine, high delivery volumes are already being tackled in such a concrete way. At the same time it was pointed out that it is not only an interdisciplinary issue, but that the topic must also be tackled globally and locally. It was suggested that more research should be carried out to accompany the reduction measures in veterinary and human medicine that have now been initiated. It might be useful to include health insurance companies and health insurance data for this purpose. Consideration was also given to how research questions on this subject could be effectively collected and subsequently processed. 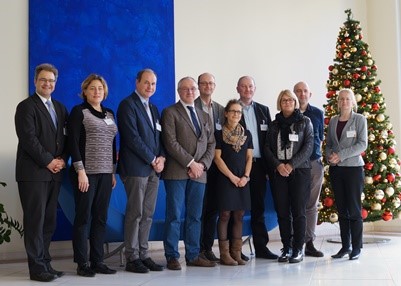 The principle of resistance. Where do we stand in Germany and worldwide
PD Dr. Tim Eckmanns Robert Koch-Institut, Berlin

Transfer of resistance - What do we know about the spread of resistance?
Prof. Dr. Hortense Slevogt Universität Jena

What are the most relevant challenges in the daily practice of the health authority?
Dr. Gerhard Pallasch Gesundheitsamt Landkreis Stade

What are the most relevant challenges in the daily practice of the veterinary office?
Dr. Doris Heim Landesamt für Landwirtschaft, Lebensmittelsicherheit und Fischerei, Mecklenburg-Vorpommern

Research initiatives on Antimicrobial Resistance (AMR) in the One Health context - What is there and what does the Public Health Service need?
Prof. Dr. Lothar Kreienbrock Tierärztliche Hochschule Hannover


Event report on VetMAB (external report) for this event