Development of models in zoonoses research - Welcome to an interdisciplinary, digital future! 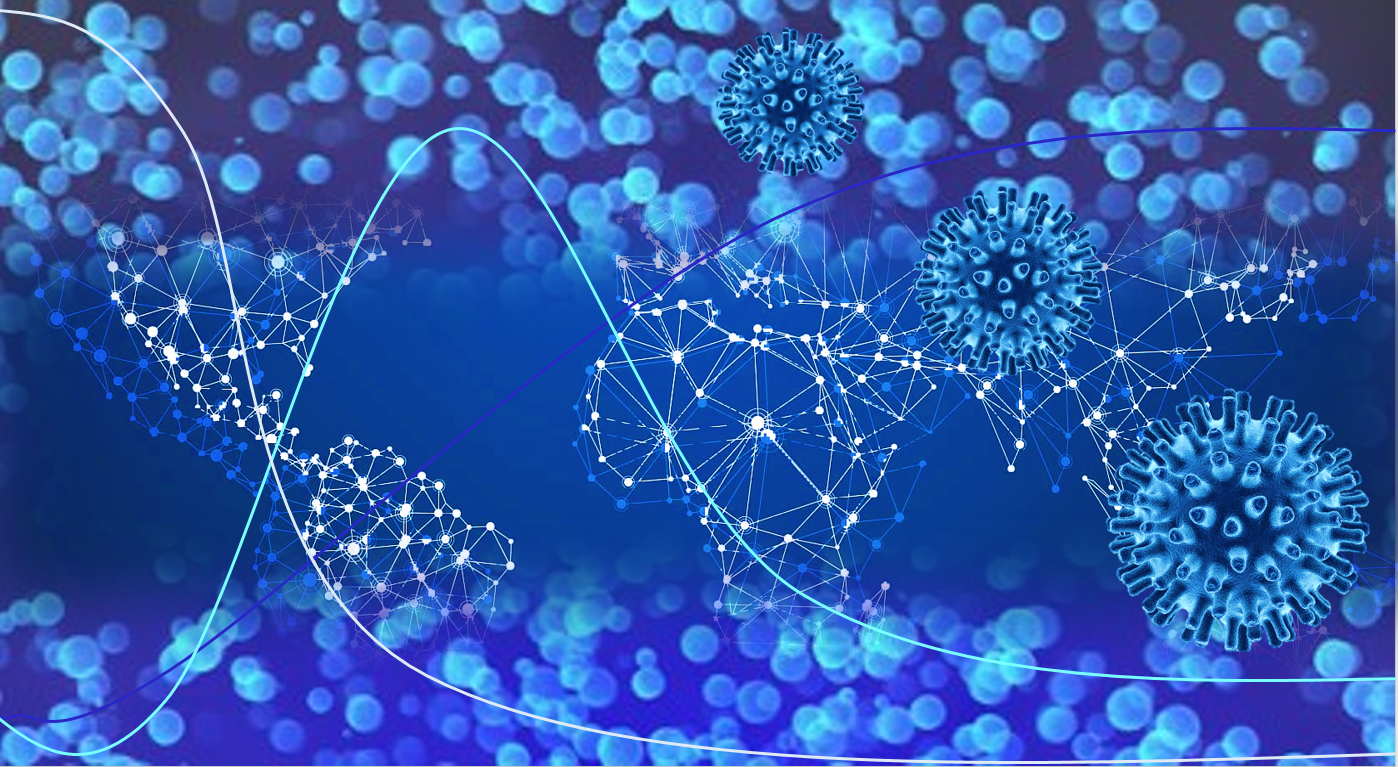 Digitalisation does not stop at zoonoses research. Here, technical progress in combination with ever increasing amounts of data open up completely new possibilities, especially in the creation of models. With these models, complex interrelationships can be presented and analysed to answer scientific questions. On November 26, 2019, researchers and employees of the Public Health Service met in Berlin for an interdisciplinary exchange on opportunities and risks as well as on concrete examples of the application of models in zoonoses research. In the exciting lectures and lively discussions during the workshop, one thing became obvious: Interdisciplinary cooperation is essential in order to profitably exploit the potential of modelling in the One Health context. The responsible handling of data and the discussion of ethical and legal issues must always be taken into account.

In the series of workshops organized by the National Research Platform for Zoonoses in cooperation with the Academy for Public Health in Düsseldorf, a workshop on data models in zoonoses research was held on 26 November 2019. Prof. Stephan Ludwig and Peter Tinnemann welcomed the interdisciplinary audience and opened the workshop on behalf of the organisers.

First the question, then the model - model development must be oriented towards the question

Dr. Jana Schulz (Institute for Novel and Emerging Infectious Diseases, Friedrich-Loeffler-Institute) led into the topic of the workshop. The bioinformatician explained the process of developing a model, its implementation and the interpretation and communication of the results. Using a model for LA-MRSA1 in pigs in Denmark, she took the participants step by step along this development path. A model can only ever be a simplified copy of reality. Therefore, it is essential to know exactly the question and the objectives for its use already during the conception of the model. In the end, the results can only be as good as the quality of the data used to feed the model. An insufficient data basis inevitably leads to poor results, no matter how good the model may be (see Fig. 1). 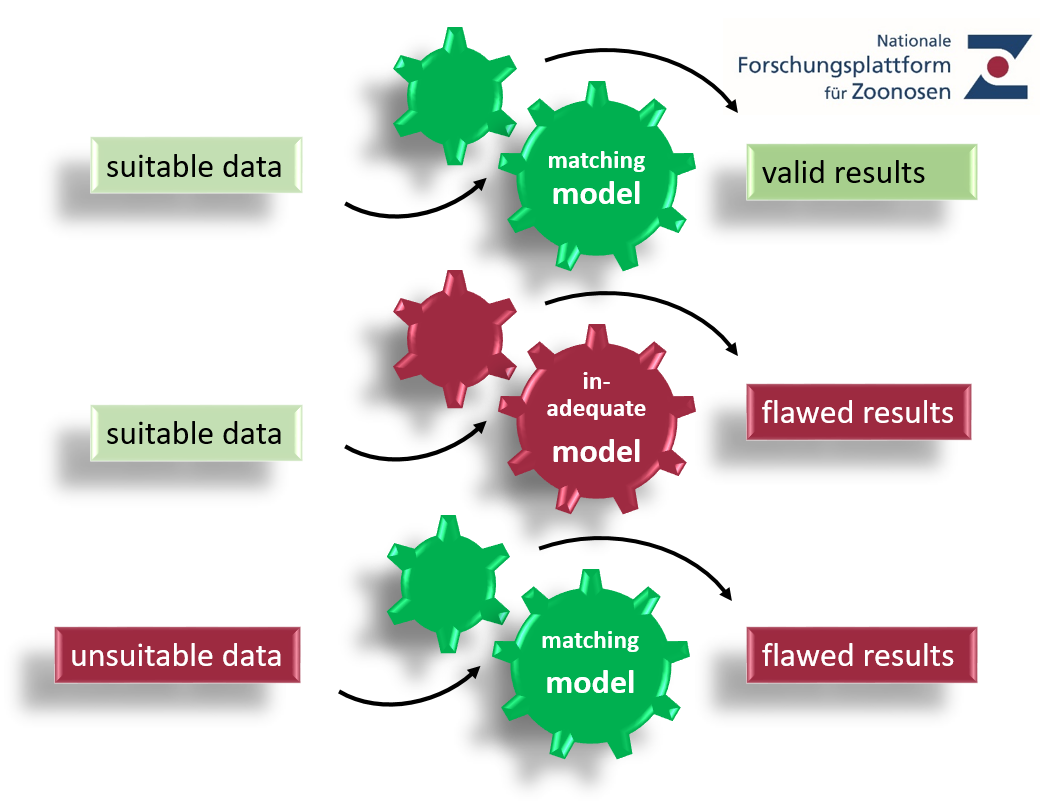 Customization of models - development of a platform for versatile use

In the future high-quality data will also fill the platform that was presented by Johannes Ponge from the University of Münster. The plattform is a tool that should enable the modeling of epidemics. The modular structure of the web-based software, the basic elements of which were developed within the framework of a zoonoses platform project, should enable flexible adaptation to different scientific questions. Thus, it should be possible to consider propagation dynamics and to gain information on the use of specific intervention strategies. The platform is based on agent-based modelling to ensure the most detailed representation possible. Thus, human and animal populations can be modelled in the form of so-called agents and their properties can be adapted in many ways to the questions to be investigated. Characteristic properties of the pathogen under investigation can also be recorded. Data protection and the dual-use problem should also be taken into account by a project-related and controlled release of the data.

The possibilities of correlative models as early warning systems

Models are often used in infection research in order to be able to make valid predictions about the spread of pathogens or their vectors. An example of this is Zoonose RISKtool, which was developed several years ago in a project at the University of Bayreuth funded by the Zoonoses Platform. The correlative model, which is an open source tool based on the R-code, integrates various habitat-describing parameters. Mrs. Alexandra Lawrence (University of Bayreuth) discussed how these can be used in combination with existing species occurrence data to make statements on the distribution of different vector species today and in the future. In view of the advancing climate change, which has already favoured the spread of various zoonotic pathogens in Europe (see Interviewreihe on West Nile virus in Germany), zoonosis RISKtool can be used for risk assessment. BayVirMos is to be developed specifically as an early warning system for the occurrence of mosquito-borne pathogens in Bavaria.  Regional climate and weather models will be combined with information on mosquito occurrence, population density and other relevant parameters. Not only the climatic requirements of vectors, but also the extrinsic incubation period (EIP) of the arboviruses will be taken into account. In the long term, employees of the ÖGD and practicing physicians should be able to use this model in order to be prepared for the potential occurrence of arboviruses in their region at an early stage.

Models in practice - prediction of hantavirus infections in Baden-Württemberg

A model, which has already been installed as an early warning system for the ÖGD, can be found in the neighbouring state of Bavaria, in Baden-Württemberg. Dr. Christiane Wagner-Wiening from the State Health Office of Baden-Württemberg presented a cooperative project between science and the ÖGD, which resulted in a prediction model for hantavirus infections. The presentation made it clear that the development of a prediction model alone is not sufficient. A coupling with control strategies based on this model is necessary. In addition, the sustainable usability of a model and the communication of results is an important element in order to generate long-term benefits for society through such models.

Models as integrative approaches in the prediction of wildlife populations

Another field of application for models in zoonoses research is the modelling of wild animal populations. In practice, researchers often face obstacles here, as monitoring wild animals presents a number of challenges. In the NASeR2–Project presented by Dr. Timo Homeier-Bachmann (Institute of Epidemiology, Friedrich-Loeffler-Institute) habitat and risk analysis models are to be developed. These should, among other things, allow quasi real time statements on the occurrence of wild animals (e.g. wild boars) in a specific area. This would make it possible to carry out locally adapted risk assessments for the entry of animal diseases via wild animals. By a weighted superposition of the incoming data into the model, it should be possible in the future to make as accurate a prognosis as possible without having to record each animal individually with wildlife cameras or GPS collars. The integration of different data sources such as satellite images, agricultural databases and traffic data aims at an almost real-time resolution, since retrospective observations in highly dynamic wildlife populations have only limited validity.

An algorithm cannot be evil - but the user can be

The last speech of the workshop was about the political and ethical consideration of models and their underlying algorithms. Mathias Spielkamp, the award-winning journalist and co-founder of AlgorithmWatch GmbH, discussed in his talk why a critical examination of algorithms and ADM (automated decision making) processes is indispensable from an ethical and social perspective. With his company, the journalist aims to uncover shortcomings and to develop evidence-based recommendations for policy makers in dealing with ADM. Although an algorithm itself can never be "evil" or "unethical", its application can be.  Responsibility for the actions initiated by a model always remains with the user or developer of the model, not with the model itself. Questions should therefore be asked for each model: Why should it be used? Is it used with the correct data? What is the significance of the model? What are the implications for society?

Mathias Spielkamp concluded in his lecture that the use of algorithms should not be prohibited from the outset. Especially the models presented at the workshop would show that there are many useful applications. However, a prior assessment of possible consequences and the creation of binding guidelines for their use is socially important. 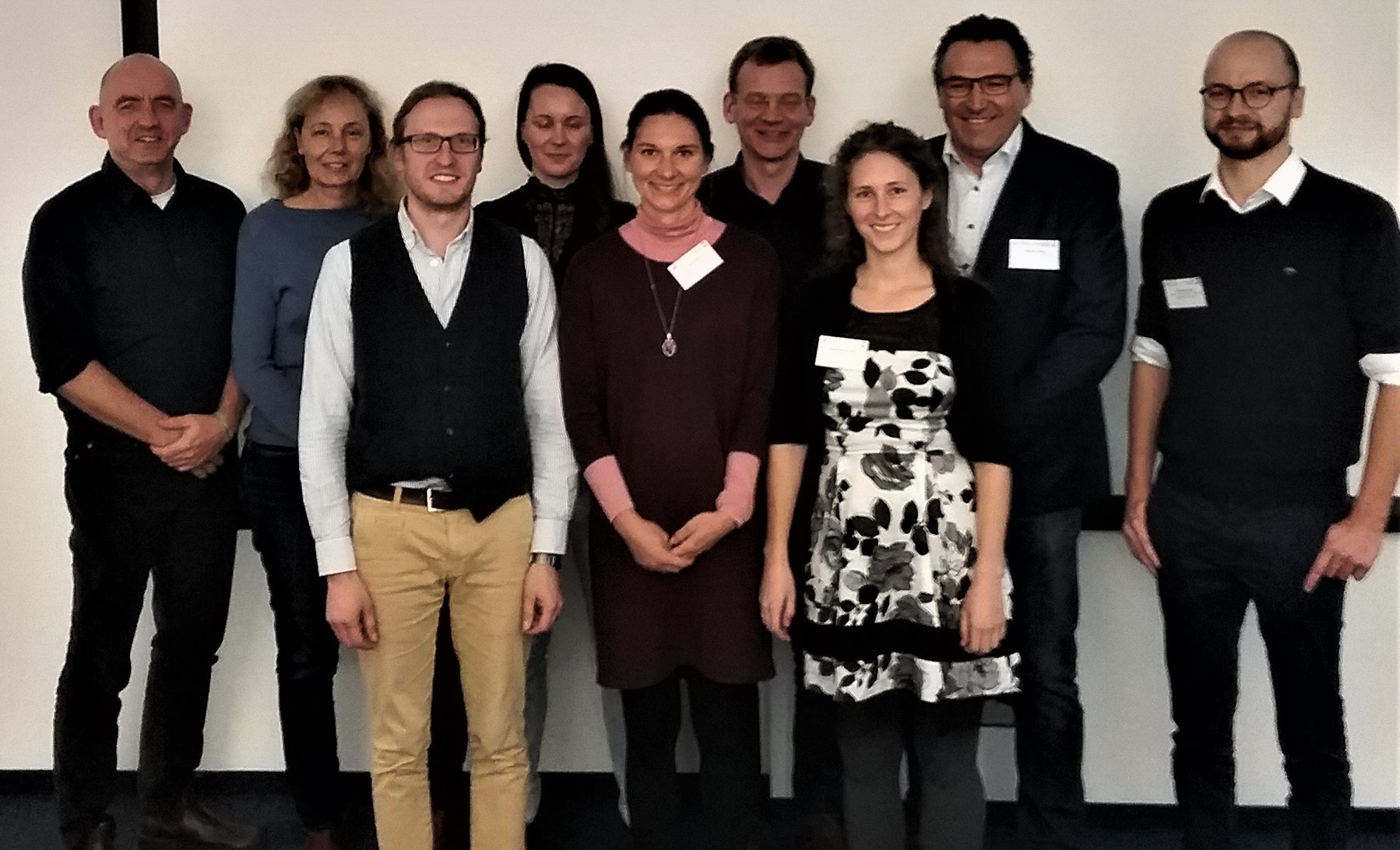 More networking and improved data access for the future

In the concluding discussion, the necessity of interdisciplinary cooperation in the development and access to models was emphasised once again. This already starts with the integration of existing models from human and veterinary medicine. Often both disciplines are confronted with the same problems and could therefore learn from each other. Networking should already be established before the joint model development, so that the best possible results can be achieved and a meaningful subsequent use of the data obtained can be made. Since the modeller himself can only act as a service provider in this structure, the questions and objectives must be provided by research or practice.

A bottleneck in the successful application of models is often the availability of high quality data. In the long term, strategies for the optimized provision/collection of data should therefore be developed. Data privacy should always be taken into account. However, data privacy should not be an obstacle to the development of models if the transparency of trade and the ethical framework are respected.

The workshop was praised by the participants as an important step towards more interdisciplinary communication in the subject area.  In the age of digitalisation it can be assumed that the content discussed at the workshop will become even more relevant in the future.

Fig. 3: Graphical abstract of the workshop "The Future with data - models that simplify the world". The complexity of modelling in zoonoses research regarding the conception, execution, interpretation and implementation of results became clear during the workshop. ÖGD: Public Health Service